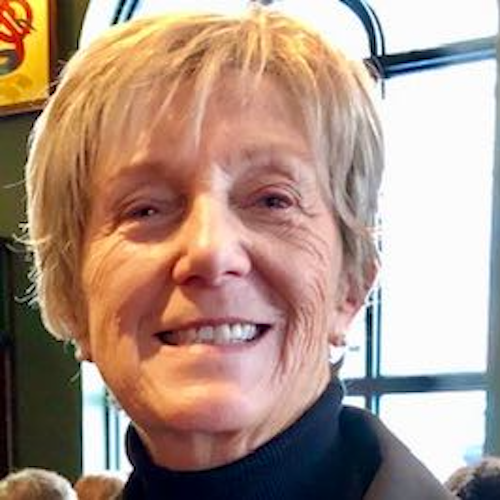 Nancy Marie Shiner (nee Power) 76 years of age 237 Herbert Street, Sydney, Nova Scotia Date of death 23 December 2022 At QE2 Health Centre, Halifax Cause: Brain Aneurism Born the 8th of May, 1946 in Halifax, NS to parents Roy and Vera Power (deceased); Nancy was one of four children. Growing up on Elm Street with her sisters, Patricia Hazell, and Denise Sommerfeld and her brother Thomas Power, Nancy showed an ability for drawing at an early age, this skill helped her throughout her life as she drew, made stained glass windows, sculpted, and made pottery. Told that she needed a skill to fall back on Nancy went into nursing, graduating from the Halifax Infirmary in 1967. Nancy joined the Canadian Army as a Nursing Officer in 1970. Her 20-year military career included qualification as a Flight Nurse and certification as an ICU Nurse. The Canadian Forces sent her to university where she completed a BN at Dalhousie University in 1987. Nancy received the Canadian Decoration, and both the Silver and Diamond Queen Elizabeth II medals. In 1983 Nancy received the Chief of National Defence Bravery Citation for running into a burning house to save an infant before the fire department arrived. Nancy liked learning so much she went on to earn an honours BA in history from Mount Saint Vincent University (1995) and an MA in history from Dalhousie University in 1998. Both degrees were completed while Nancy continued to work, and they reflected her lifelong interest in the History of Nursing. Nancy married Donald Shiner at Halifax in July of 1971. Both were Army Officers and they had to apply to their Commanding Officers for permission to marry. Nancy also needed permission to stay in the Army when she became pregnant with Christopher who was born in Brandon Manitoba in December 1973. At the time Nancy was the first serving officer formally allowed to continue her service after pregnancy. Jennifer, their second child, was born in 1975 in Kingston Ontario. After leaving the Canadian Forces in 1990, Nancy worked in the Research Office of Dalhousie Medical School managing a number of research projects. In 1998 Nancy joined the NS Medical Examiners Office as an Investigator and not long after was assigned as an investigator to the Swiss Air crash of September 1998. Never one to sit still Nancy was the driving force behind the purchase in 2000 of a two-storey school built in 1886, located near Mahone Bay. What followed was a 3-year project of restoration and creation of the School House Tea Room. They had a great time working on this together providing they stuck to their respective jobs. Nancy was the cook and prepared the food and Don was the waiter, bused and made the tea. Both did the clean-up at the end of the day. The School House provided many new experiences but in 2008, Nancy decided it was time to retire. They closed the Tea House and sold the building. In retirement Nancy was an active member of the Nursing Officers Association of Nova Scotia and served as its President to the present. Nancy worked as a volunteer with the Halifax Regional Police in their Victim Services Unit and in 2017 was named Volunteer of the year for the HRP. Nancy volunteered with the Out-of-the-cold shelter in Halifax for a number of years often taking the overnight supervision role; she was a member of Silent Witness and the Grandmothers to Grandmothers action group, part of the Stephen Lewis Foundation. Recently Nancy and Don had moved to Sydney, NS to be closer to Jennifer Shiner, her husband Donnie Hawco and their grandchildren, Abbie and Alex. Nancy is survived by her loving husband Donald, her children Mary (David Storwick), Christopher (CarolAnne), Jennifer (Donnie Hawco), and grandchildren Erin, Alexander and Abagail. Nancy wanted to be cremated and not to have any form of service and these wishes have been followed. In lieu of flowers please donate to any of the charities listed above.

Notes of Condolences about Nancy

It was a pleasure and a privilege to serve with Nancy in the CAF. Good memories of Shilo days. My condolences to Don and family.

Dear Jennifer and family, I am sorry for your loss. When I heard about Nancy I was shocked. She was so vibrant and full of life. I have many fond memories of her as one of the SHSH moms. She will be sadly missed. Your family is in my thoughts and prayers. Sincerely, Naomi

I met Nancy and family in Holberg B.C. I was the visiting community nurse and she was the army nurse. When my job required challenging the military status quo Nancy was there to see that the client received the required care and I was not banned from the Base. A no nonsense gal indeed and a true friend for the past 40 years. My heartfelt condolences to Don, Chris, Jen and Mary.

I met Nancy in September 1980 when I was employed as a Nanny/Mothers Help for Nancy & Don's two children Chris l & Jennie. Nancy instantly made me feel welcome and treated like a member of the Shiner family. Nancy was a beautiful person, with a caring nature and a beautiful smile. I will always remember Nancy and keep her close to my heart.

I first met Nancy at Stad in Halifax. Always smiling she was gentle with us newer nurses. I met her again in the morgue following the Swiss Air crash. Even in that sad, foul environment surrounded by death she made me laugh!I loved her smile, envied her spirit and aspired to be like her! I will remember her and say her name!

Nancy was a beautiful soul. Compassionate and willing to dive in to help others where she was needed, quietly and without seeking praise. Always practical with a no nonsense attitude and a wonderful sense of humour. A great walking companion. An excellent cook and baker.

I met Nancy through her friendship with my mother, a fellow nursing sister and veteran. Over the years she was a constant support, friend and caregiver, helping to keep mum comfortable at Camp Hill. Nancy kept us laughing through many tough times and would make the Energizer Bunny look lazy!

You will be greatly missed by so many people Nancy and my deepest condolences are with your family.

I was so saddened to hear about passing of your mom. I hope and pray that you will have strength during this time of loss.

Nancy was a valuable member of our Bedford Grandmothers Group (Stephen Lewis Foundation ) as she could be counted on to fully contribute to any project with a no nonsense approach. One time, at my house, Nancy (the nurse) cautioned me about my kitchen mat being a hazard for a fall. I was rather reluctant to get rid of it and she just firmly told me that it would be much worse to be sprawled out on the floor when the paramedics had to come to assist. We trashed the mat together!! She was ever the caring soul and left a wonderful legacy for her family and to her community.

I'm sorry for your loss as it's never easy.Cherish all of the amazing memories as you will rely on those to get you through this difficult time. My thoughts are with you all.Sending my love.

Dear Don, Chris and Jen....I am at a loss for words. I am so sorry to hear about Nancy's passing. She was always considered the fun, cool mom by our class and I know Jen and Silvia adored her. She was strong and no nonsense and I really admired that about her. Your family is in my thoughts. Love Heather

A beautiful tribute to my wonderful friend. I am so happy that she organized the move to Sydney to be close to family, the family support is so important at this time of loss. Nancy was always a woman on the leading edge. She will be missed and always thought about with love.