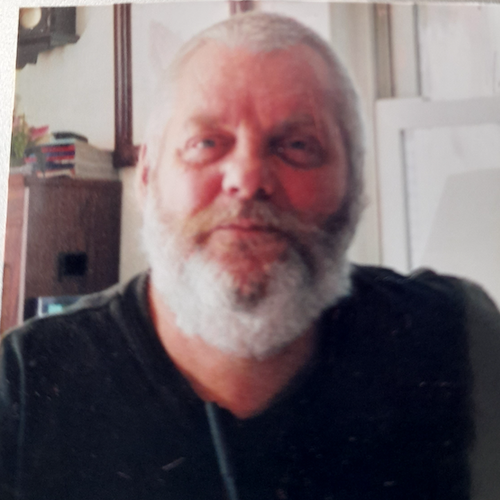 Bauke was a lovely man taken too soon. He spent his life attempting to express himself using oils and pastels and the human form. During some of this time he was in Ontario and has many friends in the arts community in Hamilton, and Dundas area. Ten years ago he discovered his love of poetry. His whole life changed the day he began to put words on paper and he can count very few days during those years that he did not write. He has published a number of poetry books. During the covid lockdown he discovered online poetry groups where he both read his and enjoyed other's poems.

He was an avid reader, often a book a day or so, most especially sci fi and fantasy.

Bauke has travelled the world but finally settled in his home of birth - Nova Scotia, Canada with Ellen (Woo) his partner of 32 years. He was a man who was larger than life, yet songs and poetry would bring him to tears. He had a zany sense of humour which he was certain people would eventually 'get'. He never gave up on it. He will be sadly missed by all his friends on Twitter and FB who loyally followed and with whom he loved to read and share the poetry.

He left suddenly and unexpectedly and is sorely, sorely missed.

I don't do grief very often, but today I'm doing it. I just found out about Bauke's departure when I went to check his FB to see if he's been posting. I find the loss of genius painful, because encountering it isn't an everyday thing. I cherish the short time we had although we never met in person. The ether, internet, words and thoughts exchanged were enough to seal the bond. "Loss" does not encompass it.

Your light shone upon me from afar

as though you knew my darkness

I sit now in stunned silence

with wishing my only companion

Ellen, we are so very sorry for your loss on your loving Bauke. Our deepest sympathies and condolences. Love you.

Writer, poet, artist Lover of Ellen and explorer of life. Gone too soon, too soon

Bauke was not only a gifted poet but he was a wonderful friend. I cannot believe he is gone. He spoke often about his deep love of Ellen…it was immeasurable. I always loved seeing new poems he was working on and the excitement he would feel from writing. He inspired me in many ways. The world is darker without him in it, and my heart is broken. I miss him very much. But, since he poured his heart into his poems then he is with us whenever we read them.