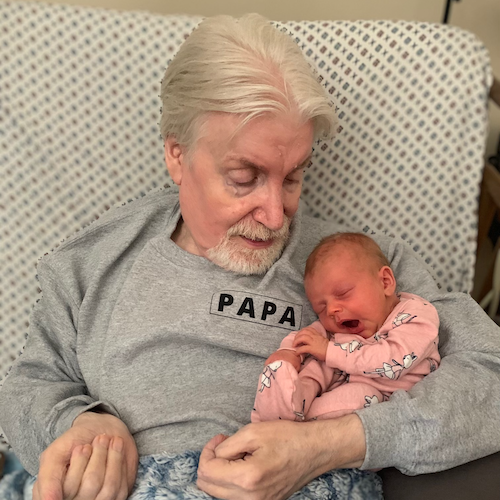 It is with great sadness that we, the family, announce the passing of David James Bridson at Halifax, NS, on January 16, 2023. Born in Manchester, England, he was the son of the late Michael and Edna Bridson. David came to Canada in 1964 and met his wife, Kimberlea, in Pictou, NS, in 1986. Dave and Kim were married on September 5th, 1987 in New Glasgow. Dave was best described as social and quick to crack a joke in his dry British humor. He was on the go with projects, with a love of woodwork. He enjoyed working in hardware/lumber stores throughout his life before his illness. Dave was diagnosed with Multiple Sclerosis in 1995 and battled it for 27 years with his wife Kim faithfully by his side. Dave enjoyed watching classic films and war movies, such as "The Great Escape", and passed down this love for cinema to his son Andrew. He watched the English show Coronation Street from its beginning, which his daughter Katie enjoyed watching alongside him every afternoon. Dave was always telling his friends and family how proud he was to be a grandfather to his beautiful granddaughters Ellie (6), and Millie (9 months). Dave's wife Kim was the love of his life, as he was hers. He was a romantic at heart who loved giving, especially to the people he loved. His loving spirit will be with us always. “I love Papa all the way to Heaven" – Ellie Surviving are his wife; Kimberlea (Cumminger) Bridson. Children; Son; Andrew Bridson (Samantha & Brantley), Granddaughter; Mille Bridson. Daughter; Kathryn Bridson (Ryan), Granddaughter Ellie Bridson-MacKenzie. Sister; Lynn Putt, Brother; Phillip Bridson. Best and life long friend; Steve Harder and his wife Debbie. David was predeceased by his father Michael Bridson and Mother Edna (Greaves) Bridson. He often talked about "Little Gran" whom he loved dearly. Service Details: Dave's dream was always to live in a lighthouse, and we will be honoring his wishes. We will be celebrating his life in late spring in Pictou, the place where his new life began in Nova Scotia. Family and invited guests. Donations in memory of David Bridson may be made to Easter Seals or MS Society of Canada. David was very grateful to have the support of the Easter Seals, that helped him acquire an electric wheelchair, and a lift to get into his bed. Also, the MS Society in hoping someday there will be a cure for MS.

Notes of Condolences about David

Kim and family, so sorry to hear about Dave’s passing. Praying for you and your family

We had the pleasure of having the Bridsons as neighbor's when we resided on Bucheron Crescent. So sorry for your loss. Dave was such a kind man, a great neighbor

Sincerest condolences to all the family.

My heart goes out to Kim and family for the loss of David. I had the pleasure of meeting Dave at my 40th birthday party having worked with Kim for many years. MS is a devastating disease and it is difficult seeing the toll it takes but I know Dave met it head on and with great courage. I also give praise to the MS Society who provide financial assistance and supports for things not covered by other means. Sending all my love to Kim and family.

So sorry for your loss. Mt thoughts and prayers are with you during this sad time.

My deepest condolences to all of you.Sending you all a big hug in your time of great loss and sadness.

My deepest sympathy to you Kim, Andrew & Family and Katie & Family. My heart aches for each of you, I feel blessed to have known Dave and I always admired his positive spirit. He was always happy and I know you all were his loves of his life. Dave had a rough journey and I always admired his strength and I also know you all were his pillar of strength.

I had the pleasure of meeting Dave and Kim through our children when they started grade primary and our children's friendship continued to their adult life. Always a loving, caring family. I have memories of Dave driving our kids different places when they were young, and us sharing stories and special moments throughout the years. He was a loving family man that will be missed very much. My deepest condolences to Kim, Katie, Drew and family.

Sorry Kim, Andrew and Katie to hear about Dave it has been a long road for all of you

I had the pleasure of knowing Dave and Kim through Katie, cutting his hair was always a great chat, always knew how to make you laugh and smile!

Thinking of you all, at this difficult time!

He will always be with you♥️ Hugs.

Kim Andrew and Katie...My heart is saddened by this news. My memories of Dave brings a smile and tears at the same time! My thoughts are with you xoxo. (Pizza Shelley)

I had the honour to work with Kim. I know how much she loved and the day she retired. My heart and love goes to her and all her family. They raised 2 beautiful children who grew up to be amazing adults. All my love

Kim, Andrew and Katie, please know that I always enjoyed the conversations I had with Dave over the years. Always made me laugh. His spirits were always bright. Keep your memories close. I am so sorry for your deepest loss…sending hugs and love ♥️