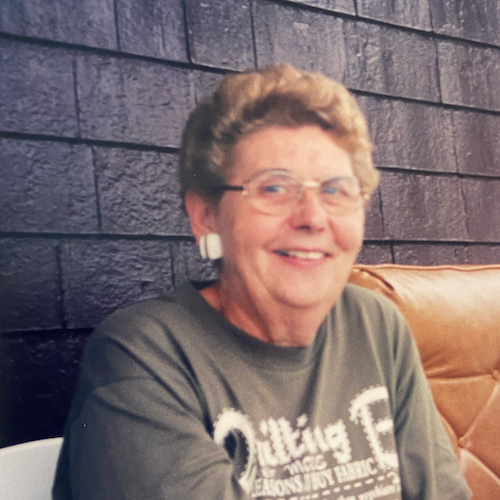 With gratitude for a long life, lived well, we announce the passing of Dorothy Louise (Eisnor) Fulton. Dorothy was born in Maders Cove July 24, 1931, to the late Brent and Amy (Joudrey) Eisnor. She is a graduate of Mahone Bay High School and the Victoria General School of Nursing. She was a proud member of the VGH Alumni.

During her first assignment at Lunenburg Hospital, she met and later married Douglas Graham Fulton, Debert, NS. His work in the banking industry took them to numerous global destinations from Cornerbrook, NL; Saint John, NB; Baden-Baden, Germany; Dartmouth and Sydney, NS; and finally, to Riverview, NB. Along with raising her family throughout these moves, Dorothy continued to practice her profession in three Atlantic provinces.

A very social person, with an enormous laugh, Dorothy made and maintained lifelong friendships from their travels, her calling and her church. She was engaged in all of the girls’ activities, from freezing in a rink while they figure skated in the wee hours of the morning to Girl Guides, where she showcased her talents as a cook, seamstress, knitter, crafter, and camp nurse. She greatly enjoyed camping with the family at numerous provincial and national parks, spending days on the beach and clam cook outs at Doug’s siblings’ cottages and harvesting vegetables on his family farm. She loved visiting her family homestead in Mahone Bay.

Following Doug’s passing in 1990, Dorothy continued nursing and remained active in Trinity United Church, Riverview. She continued her love of music with the Trinity choir, the UCW (She was a life member) and the Quilters’ Guild as well as serving on various committees. In retirement, she remained active, walking daily in the subdivision or along the Petticodiac and participating in Seniors’ Fitness Classes. She played with the Fundy Heights Bridge Club and enjoyed baking for and hosting their games. She stockpiled her homemade socks and tasty preserves. As well as projects with Trinity Quilters, she made numerous beautiful quilts herself. From Dot, we learned how to recognize “good quilting” and were taught to “always check the corners”. She continued to be a welcome visitor with her sisters-in-law and was renowned for her culinary contributions at the family Thanksgiving celebrations especially her German Kohl Slaw.

Dorothy sometimes joked, as she aged a bit, that she was destined to have only “grand dogs” so she was both surprised and thrilled to become a proud mother-in-law and then an excited grandmother of five (even a set of twins!).

When the onset of Alzheimer’s necessitated her move to Parkland Estates Assisted Living Halifax, she continued to enjoy socializing and, at times, attempted to help out, falling into her familiar role as nurse. She loved visits, especially from her beloved grandchildren.

The family wishes to thank Parkland Estates Halifax staff for her care.

A celebration of Dorothy’s life will be held August 10th, 2022, at 2:00pm at Riverside United Church Bass River, NS. Internment will take place at the Debert Cemetery.

If desired, memorial donations made to The Moncton Hospital Foundation, The Alzheimer’s Society or a charity of your choice. Family flowers only.

Cremation has taken place under the care and direction of Eirene Cremations.

Notes of Condolences about Dorothy Louise

Fond memories of the times when we lived across the street, on Muncey Drive, Riverview. Karen, Heather: Please accept our condolences, on your mom's passing.

My deepest sympathy to Dorothy’s daughters and your families. I had the privilege of working with Dorothy at The Moncton Hospital. Seeing Dorothy arrive for a shift always made me feel like we were going to have a great day. She had a calming presence that positively impacted her patients and her colleagues. Kind, funny, and a competent professional, and her lovely obituary tells the story

of a loving family woman and a dear friend to many.