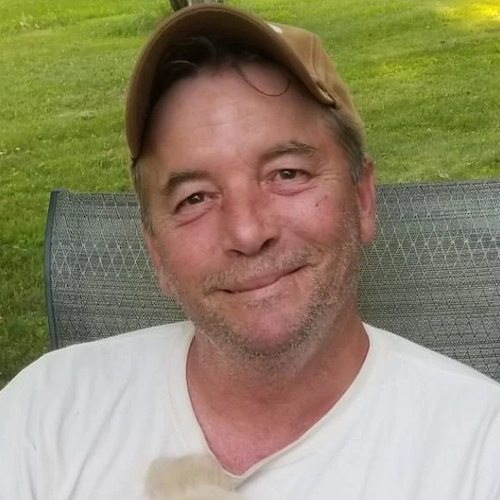 Douglas John Geairns of Ottawa, passed away peacefully at the Cornwall Community Hospital on the morning of July 24th after a quick and tough fight with pancreatic cancer.

Doug was a generous man with an infectious smile, had a goofy sense of humor, and was always willing to be the helpful handy-man. He loved camping, fishing, hockey, aviation, ghost stories, his truck and his power tools. He was rarely seen without a hat on his head, enjoyed hosting wing night and having a pint at his favourite pub, Liam Maguire's.

He was in the HVAC industry for over 30 years, was valued by his customers, and loyal to his company (Master Group) with work on his mind until the very end.

A celebration of life will be held at Liam Maguire's Pub (1705 St. Laurent Blvd, Ottawa) on September 24th at 3:00pm. At a later date his ashes will be transported to England where he will be scattered to rest with his late parents, Pamela and Mark.

Notes of Condolences about Douglas John

For the better part of two decades, I had the pleasure of spending most Saturday mornings during the hockey season with Doug. He was my teammate, linemate, assisting captain, beer fund manager, and not least, my friend. Never one to hog the conversation, you could hear his laugh for miles, and he was respected when he spoke. I am fortunate that our friendship grew to include our families and that we were able to attend his wedding and so many gatherings at his home. Our hearts go out to Dawn, Jamie, Katie, and their families. And to share an inside joke from the Dawgs: Doug truly had a life. Keep your stick on the ice buddy!

Doug and I had a special bond over our love of Dawn. I loved his sense of humour. He would often send me funny messages or joke about Dawn’s Lists or things she said or did. He had lots of patience for Dawn’s continuous process of “Getting Organized “, as long as stuff didn’t end up in his garage! He was always willing to lend a hand or a tool when we needed it. I’m thankful for the love and laughter he provided in the much too short time we had together. RIP Bro and continue to watch over Dawn. Xoxo

I didn’t get the moment to meet you Doug but my girls met you (Ashley&Amanda Garaughty) cousins. Our thoughts and sympathy go out to Dawn and family. May he Rest In Peace. 🥰

Being on the Isle of wight in England I never had the chance to see Doug or Kim apart from in photos and on Dad's home cinema.Kim often popped over but I didn't meet Doug until I took a holiday to Canada at the age of 18.It was great to meet him and always the joker.Then again we met up for the old boys 80th birthday with for the first time all cousins together. Something I will always feel chuffed about.only twice but you made an impression.All our love ❤️

I first met Doug and his sister Kim when they came to England in 1965 to be christened at St Mary's , long Ditton Surrey, where his mom and dad had married in 1957.

By now , Joan and I were married with 2 children of our own, Gail and Calum.

In 1975 we all went to Canada with my own mum,having lost Dad a couple of year previously.

We piled into Mark's Station waggon, all 9 of us, and complete with tent and trailer, and a canoe we went to Algonquin NP, Parry sound

Niagra and Toronto before returning to Ottawa and eventually home after a great vacation.

Luckily enough this holiday was filmed on a cine camera and this film was transfered to DVD recently, so many happy memories captured for ever.

Other visits were made over the years , sadly one was for Mark's funeral, also happier ones such as Kim's wedding and also Doug and Dawn's wedding in the Caribbean.

That will a wedding I will never forget

Pam celebrated her 80 th birthday with a dinner , when Joan and I arrived completely unknown to Pam, but all carefully orchestrated by Doug and Kim.

We all spent a very happy Christmas together.

In 2017, we went camping with Doug and Dawn in Quebec, and later all went to Erin's wedding with Pam who was sadly very poorly.

.My sister passed away shortly after we had returned home so it was another trip back to Dougs for the memorial service.

In 2018, my own twin brother and I were celebrating our own 80th birthday and Doug,Dawn , Kim and Dave came over to celebrate with us and the family and Doug met his cousin Calum once again, as Calum lives in Australia, and hadn't met each other since about 1975.

spent a few days in N.Wales together,

Sorry got the 40th birthday wrong! It was in fact 80th! I know your laughing at me Doug!

I first met Doug at their wedding in the Dominican Republic and I can still see how happy he made my dear cousin Dawn. I am so sorry for the heart ache you are all experiencing and hope that the beautiful memories of Doug will help to ease some of the pain. Sending love 💕

I also met Doug at Lexus Resto Bar in 1997 and Amy time I’d seen him it was certainly with a hat on. Years later when I needed HVAC advice he was willing to help out.

There are never the right words when you lose a cherished loved one. I knew your dad many years ago and he always had a smile and was just a good soul. Hold on to your memories of time together, he'd want you to remember all the shared memories you made .

I met Doug 6 years ago, and upon first meeting him he treated me like family.

He helped me with issues around my house without ever asking anything In return, that’s the kind of guy he was, always willing to give a helping hand with a smile. Every time I would visit Dawn and Doug they always went out of their way for my allergies and cleaned top to bottom of their house to make me more comfortable when I visited ( and let’s not forget the awesome meals they’d prepare) I’m beyond blessed that I got to know this great man, his kids, and his wife.

I was honoured to be Dougs cousin Traci’s plus one at Doug and Dawns wedding in Dominican Republic. They welcomed a stranger into the fold and we parted as friends. I was made to feel like part of the family. It was so good to meet up on your last trip to England, sitting in a pub garden on a rare, warm evening!! So thank you Doug, you’ll be greatly missed . Sleep well my friend

I will of course remember our fun growing up years when we were small and lived in Canada ! later on we had some great times bringing Cam and my step sons David and Scott over to Canada where they fell in love with Doug learning all about hobbies that he had as he welcomed us into his and Dawns home. It was great to be able to share his wedding day to Dawn in Dominican which we had a very memorable holiday ! Another event that took place 4 years ago is the family together for Dad and uncle Michaels 40th birthday but didn’t realise this would be the last time I would see my cousin Doug! Till we meet again cuz sleep well xxx

I'm proud to call myself your daughter, the sunshine of your life, your kiddo, your ever loving katiebug. I will hold dear all of the things you taught me: from making my wrist-shot better, standing up for myself, and simply changing the filter on my furnace. It devestates me that I won't hear your voice ever again, but I'm glad you were able to hear mine and relax comfortably in your final days.

Dawn, we are shocked and saddened about the news of Doug’s passing. We will of course be there in September to celebrate his life and hear wonderful stories about him! I send you the biggest of hugs and all the positive energy I can muster! Kim & John. ❤️

We we privileged to know Doug from the age of 6 months, along with Kim we were part of his early years,

And always remember his first steps and his first hockey game,

Sadly after a few years Pam and Mark moved away to Winnipeg and later Jo and I moved back home to England,

It was great Doug to be part of your life and we are going to miss you. Rest in peace

All our love Ken and Jo xxxx

Will Always remember the firework brigade , we were a formidable fire lighting machine…. And although our fishing trip wasn’t successful , in so many ways , will hold the memories always. And HartFord Whallers , was my team….Big hugs brother

I met Doug in Dec. of 1996 at his local hangout "Lexus Resto Bar" in Orleans. Later, my sons played hockey with his son Jamie. Doug was such a cool cucumber, never saw him get angry and when things got funny, his laugh was so low key but so sincere. I will miss you my friend.