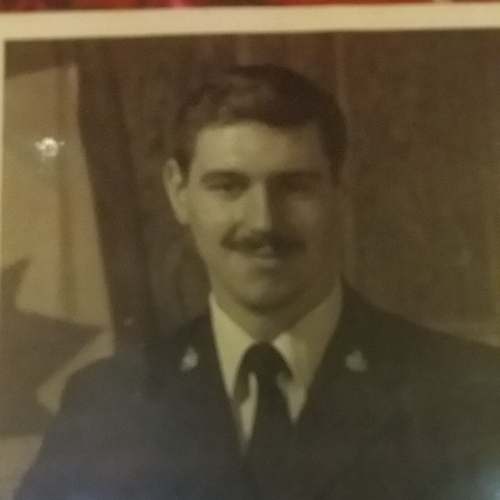 Keith William Howard Hussey, of Canning, Nova Scotia, passed peacefully away during the early hours of July 29, 2022, at the Valley Regional Hospital.

Born on February 26, 1961, Keith was the eldest son of the late Harris and Norma Grace (Snow) Hussey of Clarke’s Beach, Newfoundland. At a very early age Keith became involved in Cadet’s, Militia and eventually enlisted in the Royal Canadian Air Force. Keith served in multiple postings, until he retired from active service in 1994, in Middleton Nova Scotia.

Over the next 5 years Keith was supervisor at Britex, Middleton, NS., until 2000 when he embarked on a second career in Saudi Arabia until he and Candi returned to Nova Scotia 2016.

Keith was a very proud Newfoundlander, he would not hesitate to break out the guitar and it would not take long for those in his presence to become accustomed to Newfie songs, and “yarns” from and about his beloved Newfoundland. From the deserts of Saudi Arabia to the golf courses in multiple provinces and countries, family and friend gatherings, to those whom he supervised and worked with, to the countries of Greece, UK, no matter who you were or where you came from, Keith will be remembered for his pride in his Newfoundland Heritage. Each person he came in contact with can attest to Keith’s ability to teach you something about his beloved Newfoundland. Its not surprising that in the final hours of his life, Keith passed from this world listening to Newfoundland music while holding the hand of his beloved Candi.

Keith loved working with his hands and could build just about anything, creating and developing his own design. Most notably the many pieces of furniture that he made for Candi. Keith loved the outdoors; he became an avid golfer and very competitive on the green. Keith was also an accomplished diver and had many notable dives from off the coast of Saudi Arabia amongst the coral reefs to a diving expedition with National Geographic off the coast of Greece, just to name a few.

Above all Keith loved his family and friends, he was especially grateful for the company of his Fur-Babies. Although Keith loved to travel, he was a homebody and was most contented at home.

Although by many measures Keith’s life was short, however, he has lived a great life.

Keith will be remembered and cherished by his wife Candi, Children: Kim (Robert), Larry (Barbara) and several Grandchildren.

Keith held a special place in his heart for his nieces and nephews, regardless of space and time, he was very interested in each one of them. Leanne and Bradley, Mackenzie and Rodney, Liam and Hailey.

And many, many cousins, friends and acquaintances too many to mention individually, all of whom has a special place in his heart.

As per Keith’s wishes: cremation has taken place, there will be no formal funeral service/s or visitation.

Keith’s cremains will be returned to his beloved Newfoundland at a later time.

The family would like to express our sincere gratitude for the many Doctor’s and Specialist, the numerous VON Nurses and Care Givers, that took such thoughtful and compassionate care of our dear Keith over the past several years, your help is immeasurable.

Thank you, Eirene Cremations, for your compassionate care.

It was wonderful to get you know you and Candi. You always made me feel so welcome in your home. I will miss your sense of humour and kindness. You will be forever in our hearts..xo

I met Keith while working at The Britex Group in Bridegetown in 1998 and he and his wife, Candi, soon became good friends. I was a newcomer to Nova Scotia and they often took me under their wings to show me around this beautiful province and to meet new friends. Keith will always be remembered for his kindness, thoughtfulness and for making people feel at ease and comfortable. He knew how to create an evening full of song and heartwarming tales of his beloved Newfoundland. I will always remember good times shared with Keith and Candi, Roger and Gina, and Steve and Judy. We were golf partners during a Britex Golf Touranment in Paradise one year. As a fledgling golfer my ball only skimmed along the ground. It was only because of Keith's skill and experience as an avid golfer that we won the trophy that year! Those were the good times! I am so thankful for Keith's good sense of humor, for making me laugh and for the wonderful friendship I've had with him and continue to have with Candi.

Dave joins me in sending our heartfelt sympathy to Candi and all of Keith's family. We are so sorry for your loss and are thinking of you during this difficult time. Sincerely, Kathy Witherly

Our memory is of meeting Candi and Keith at Jzala compound and the wonderful friendship that turned us into a family. We had great and funny times going out for dinner and just laughing about a lot of things. Candi if you need anything, you know you can call us, Merl always said we were sisters from different parents. Love you and our condolences to you and your family.

Working together is Saudia Arabia, playing golf in Riyadh, the endless good times on the Golf courses.

Our heart felt symphaty and condolences to Candy and Family. RIP brother.

Remember good times with Keith, on the golf course, having a couple of 'pops', lots of laughs. He had a great sense of humour, was compassionate and cared for people. All our condolences to Candi and the family.

I met Keith in Jeddah, Saudi Arabia. A big guy with a big heart, loved to socialize with everyone. I will remember all those bbqs, trips to the desert and others for years to come. Will miss you dearly Keith - rip.

Fond memories of Keith @ Al-Salam, playing Golf in the Middle East & visiting around a barbecue (aka a Braai in South Afica)

Heartfelt Condolences to Candi & all his Family. 💐💐💐

Keith was a very close family friend, and very much like an uncle to me. He was kind, strong, smart and had the best Bear Hugs. I remember a night of pictionary and winning the round with one line and the word tsunami. His laugh was infectious, his knowledge was endless and his songs still live in my mind. My many condolences to his family, we have endless love for you all.

So sorry for your loss. Our condolences to all the family. I didn't know Keith but he sounds like he was a great man.

So honored to have been able to meet you . You will forever be in my memories and heart. You truly will be missed. Xo

Truly gonna miss all the laughs and your funny and smart comments,so glad i had time to get to know you and Candi! You two had such big hearts...we all love ya rip keith

Sending condolences to Keith's family. I met him many years ago while he was stationed at 5 Wing Goose Bay, NL. RIP Keith

A dear friend had many good times with Keith and Candi gone but not forgotten.

We met Keith while living in Saudi Arabia. He entertained us with his jokes and his music. On any given evening one could find him sitting outside his villa strumming on his guitar or making kitty condos for the feral cats on the compound. It was his love for his family, his animals, and his music that drew us to him. Great memories of a great person!

I only knew Keith for a short period of time (ex sister-in-law). The times I met Keith he was a very smart, kind very humerus person. I know u had it hard the last few years with your disease . To his family friends & his wife I send my heartfelt condolences to u all.