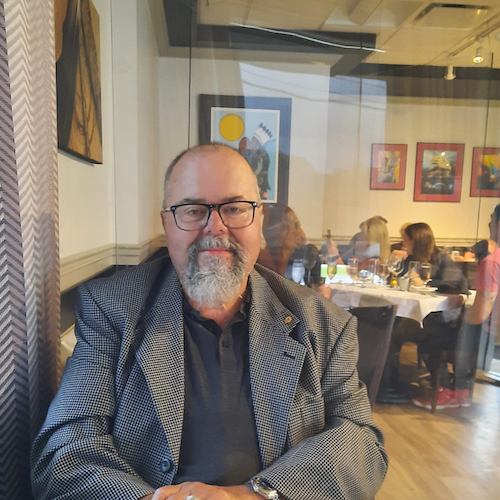 The passing of Maurice Joseph Pitre, aged 61 of Fredericton, NB occurred peacefully and on his own terms on Thursday, October 27, 2022 at Halifax Infirmary. Cremation has taken place.

He was a former member of the Kinsmen Club of Fredericton, and held several executive positions. He was a barber for over thirty years and owned Hashey's Barber Shop, downtown Fredericton from 1997 to 2018.

He loved cooking, baking, camping, playing cards, the Montreal Canadiens and spending time with friends. He will be missed by all who met him.

Donations can be made to the Fredericton SPCA in Maurice's memory.

Notes of Condolences about Maurice

Almost 20 years of memories...where do we start? From late night shanigans at either Mactaquac or Durham Bridge Campgrounds, Too many road trips to recall, Parties, and oh there were some doozies and our trips south. We will forever be thankful for our time with you. You and Donna have been our "Besties" for nearly all of those 20 years. We had an automatic connection. We will miss you so much and as we promised, we will look after Donna because we know that was your biggest worry. Love you Maurice ❤️ Thanks for all the giggles along the way.

Maurice the camping at the camp site and the Thanksgiving Dinner was so wonderful. The 4-wheeler trip we had it was a blast; even thought for a while I was not sure which way to go. we are very grateful you got to go and see some of our trails. Maurice will always be remembered by Hoover and Perry. lol.

We will forever hold our memories close to our hearts. From all our road trips across the border, camping memories, weekend trips to PEI, Halloween parties, Christmas get togethers.. oh the list goes on. Maurice would laugh so hard and that sound will forever be etched in our minds. We miss him. Sending love to his family, especially Donna. He loved you so much and you were an amazing wife and friend to him.

I had the honour of working with Maurice for 4 years at Hashey’s barber shop. He and Donna both treated my son and I like family. To this day I miss going to work with him as I knew I was always going to laugh and be able to get some great (and usually hilarious) advice on anything. He was always there to listen through the tough times I had as well. He will be so very missed. RIP Bossman 🖤

Donna,very sorry about Maurice’s passing.He was a great guy.Both of you were such good friends to Susan during her illness.We will always remember your kindness.Susan always raved about his cooking.God bless you.

Maurice and Donna were some of the first people we met when we moved to NB. They booked a campsite with us for the month of August 2017. After the first weekend here Maurice announced that they would be staying on a permanent seasonal campers. Maurice was front and centre for Friday night cards, porker, Christmas in July, Halloween in August and started our Annual Maurice's Corn Boil in September. He will be missed!

Maurice was a kind, generous and funny guy whom everyone liked immediately. You will be missed, and we are glad to have called you our friend.

Oh Maurice! I must admit, I’m sure missing our back and forth communications after every Habs and leafs game . I still pick up my phone 😭! I know you’re not suffering anymore and all that you endured prior to your passing, my heart aches! Rest In Peace my cousin, you’re missed !