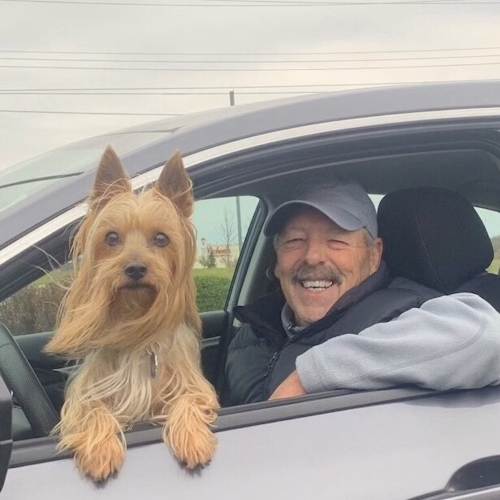 It is with broken hearts that we announce the passing of Richard “Wayne” Scott (Papa / Eway), of Bedford, NS at the QEII Health Science Centre, Victoria General Site, on September 26, 2022.

There will be a Celebration of Life for Wayne at a later date.

Wayne was born in St. John’s, Newfoundland and was the son of the late Helen and Roland Scott.

Wayne passed away peacefully with his family by his side. He was the best husband, father, brother, Papa, cousin, uncle and friend anyone could ever ask for. He adored his family and enjoyed every minute he got to be with them. He is well known for his infectious laugh and would love to hum a tune now and then! He loved his golf and belonged to Brookfield Golf and Country Club for many years where he enjoyed countless games with his great friend Rodney. He also enjoyed his trips to Tim’s with Riley to visit Laura, followed by many a breakfast club meeting with Paula and Roll. Wayne was the kindest person and was always there to lend a hand to anyone who needed help. He took great pride in the many projects he was able to be a part of with his kids, most recently building a new deck together with Ryan and helping Britt and Jonathan renovate their home in Terence Bay.

Wayne worked for 32 years as a Lead Station Attendant for Air Canada and after he retired, he took a job with Ambassatours driving tour buses, where he became a “PhD”, or “Professional Highway Driver,” as we would often call him. That was another job that he thoroughly enjoyed. He received so many poems and cards from passengers on those trips and did especially well when he and his friend Donna worked together! A highlight of that career for him was driving out to Vancouver for the 2010 Olympics. He was thrilled when he found out he would be the official driver for the Finland men’s hockey team and get to take them to all of their games.

Wayne was a great hockey fan. He loved to watch and cheer on his children while they played hockey and ringette growing up, and in recent years he was just as proud cheering on his granddaughter from the stands. Wayne was also involved with the Sackville Blazers Junior B Hockey Club for many years and truly enjoyed volunteering his time with them.

Papa Eway is best known for his smile and laughter and his quick wit. He was always laughing, even when there wasn’t anything to laugh about, he laughed. He will be dearly missed by all who loved and knew him.

We would like to extend our deepest thanks to the doctors and nurses at the QEII Cancer Centre and Palliative care team. In memory of Wayne, donations may be made to the Canadian Cancer Society or a charity of your choice.

Notes of Condolences about Richard "Wayne"

Thank you all for your kind words and memories of my honey. It’s heart warming to read them all and know how many lives he touched. Life will never be the same without him and I don’t know how to navigate the lost feelings but I have so many memories to cherish. God Bless you all. Anita and family.

So sorry for your loss. Wayne enjoyed every moment and it was an honour to have known him. Our hearts and thoughts are with you all.

I was very saddened to hear of Wayne's passing and my deepest sympathy to his wife, Anita and family. I know you have the best of memories of him. I had the pleasure of knowing Wayne through work and he was a great co-worker and lead and I was proud to have him as a friend. His kindness and smile generated around him and everyone that met him knew how caring he was. He always had a kind word for everyone. I'll always remember his laughter and smile and how he made the day so easy for everyone. I will miss you Wayne and you will never be forgotten!

A sad event for you and your family Ryan. Silvana and I send blessings and prayers to all your family members and hope that each coming day is filled with peace for you, Sarah and the children.

Over 26 years ago I met Wayne at Air Canada. It was a pleasure to work and learn from him. He will be sorely missed.

Met Wayne through the golf course and when he drove the bus for the Sackville Jr B. team. Always a smile and a friendly chat!! My condolences to his family.

Jan & I wish to offer our sincere condolences to the entire family of Wayne, on his recent passing. He was a great guy and reminded me much of his Mom & Dad who I also remember very well. Our thoughts are with you at this difficult time. May he rest in peace.

We were always so very happy to be in Waynes company, Such a great human being as are all his family. We miss you sir.

Once Sarah and Ryan became a couple, we blended our families for holiday dinners and with ease and comfort we celebrated together. Wayne's ready smile and openness lent greatly to that ease. When speaking of Sarah at Ryan's and her wedding, he began with the phrase, "Ahh! Sarah, my darling." That one phrase endeared him to us forever. We valued greatly his love of family.

I first met Wayne in the lunch room at Sackville High.

He would arrive to pick Anita up. All the guys would move away from her when we saw him coming.

Later I would go to work for Air Canada and realized he was not the tough guy we thought.

His smile, his laughter were infectious. Humour was above and beyond. What a guy!

I will miss you, from working with to seeing you in a rink.

Anita, you lucked out when you found him.

Our deepest condolences to you, your family and in-laws.

Our deepest sympathy to you and your family.

Only the good die young and we lost one of the best. Rest in peace my good friend. Condolences to the Scott family.

Wayne was one of the best! Love you Nita

Our thoughts and prayers are with you and your family .

Anita & Family, We were saddened to learn of Wayne’s passing. We always enjoyed running into Wayne in the parkade as there was always a story to be told. Please accept our sincere condolences. Our thoughts and prayers are with you during the sad and difficult time. Cherish the memories.

Anita and Family I am so sorry to hear of Wayne’s passing,my thoughts and prayers are with and Family

Paula,,Anita , Rollie and all your families. Our deepest sympathy. I honestly never ever talked to Wayne without he making me smile or laugh. He will be missed.! God Bless you all.

Anita and Family, my thoughts are prayers are with you all today.

Paula, Rollie, Anita and the entire family , I wish to extend my deepest condolences too all of you on the loss of a wonderful guy. May you hold his memories tight and may he rest in peace.

I worked with Scotty for many years. Great guy to work with. Condolences to the Scott family.

My sincere condolences to Waynes family. we both worked at Air Canada but not in the same section but when saw each other a nice chat happened but always ending with a laugh. I enjoyed out golf games at Brookfield and never was our game serious. Wayne you were above par and a true lad of honor. God Bless Wayne and his family

So very sorry to hear of your great loss. Wayne had the great ability to make you feel like you had known him for a long time even when it was the first time you met him. You were so blessed to have had each other for so long. Everyone knew that you were truly meant for each other. You didn’t have to know him for very long to know what an exceptional person he was. His smile, his easy personality made everyone the richer for having known him. My love and prayers go out to Anita and all the family. ,

Ryan, we were so very sorry to hear about your Dad. The world has lost a special light and a great guy. Big hugs to you, Brittany and your Momma, and family. Keeping you all in our thoughts and close to our hearts.

Wayne was a truly special person. I have many memories of Wayne, Anita and the Scott Family all of which include the following elements: Love, Laughter, Positivity, Support, Kindness, plus much, much more! To pinpoint one specific memory to highlight is very difficult as all were truly special. Rest In Peace dear cousin. Until we meet gain.

I had the pleasure meeting Wayne through the Sackville Blazers hockey club when he was a volunteer, and I was a coach. I certainly remember his infectious laugh, and his ability to connect with everyone he met. When he was a bus driver for Ambassatours and he was able to drive the Blazers to some of our away games it was always a good night spending the time chatting with Wayne on some of our long drives and sharing many great laughs. I will miss seeing Wayne and hearing his laugh...

I remember Gail telling me that as soon as she met Wayne she knew he was the one for you, Anita. She was right. My heart aches for you and your family, he was such a lovely, kind and caring person. My condolences.

I met Wayne when our girls were starting school. I loved his stories about work and how hard he worked on his kitchen reno. He wanted it to be perfect for his family. Wayne was a sweetheart ❤️

His laugh and great sense of humour. Just thinking about him brings a smile to my face.

To the Scott family, so sorry to hear of Wayne’s passing , please hold the fond memories of his infectious smile close to your hearts during this difficult time.

My husband Lloyd and I are very saddened that Wayne has passed away. We were great friends in high school and then again reconnected when our boys were in minor hockey. Always a smile and a giggle were his trademarks. He adored his family

There was a period of time before he met Anita that the three of us did everything together...movies, dances and just hanging out in Waverley. Thank you Wayne for having made our lives richer with your friendship. Our deepest sympathy to all of his family and friends.

Worked a lot of flights with this wonderful man. Some of the best times , in my career , thanks for the laughs Wayne.

Our condolences to Wayne’s family. Our thoughts and prayers are with you.

Wayne was one of a kind. The best of the best. I never knew two people more in love than Nita and Wayne. He loved his kids like no other and was a great friend to all that knew him. He will be greatly missed. My heart breaks for the family. Sending much love to Nita, Ryan and Brittany as well as all the family. Xo

This man was one of my first LSA at Air Canada YHZ, great to work for and just be around, yes always the same demeanour, smiling and laughing, in retirement I would run into Wayner at Sobeys/ Mill Cove, 2 min chat always turned to 15, will miss seeing you my friend, great memories, deepest condolences to the entire Scott Family, RIP Wayner!

We especially loved our trips to Cape Breton with and without our children. We had many laughs and great times. We will truly miss you, Eway❤️