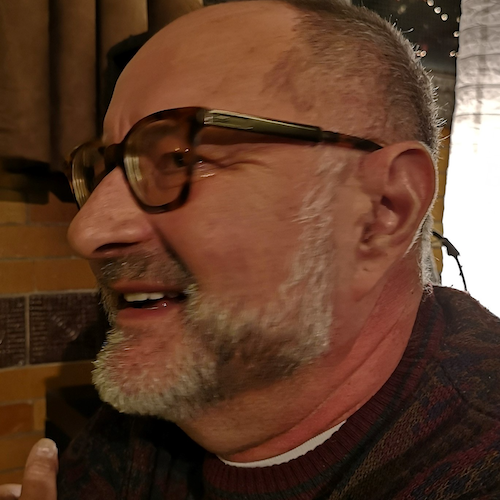 On 28 September 2022, Roy Gerhard Dahl released his spirit and energy to the Universe to live life eternal without pain, worry, or fear.

Roy was born in south central Alberta at the Didsbury General Hospital to Elsie and Jake Dahl, joining three other children in the family; Carrie, Dennis, and Connie. He began school at Ross Ford Elementary and graduated from Didsbury High School. Following high school, Roy completed a three-year diploma program in biblical studies in Saskatchewan and then went to live in Calgary. He attended the University of Calgary and worked for the Nova Corporation and then NovAtel. He also acted in local theatre productions for many of those years.

Roy was raised in the Bergthal Mennonite Church and baptized in his teens. A life of faith was essential for him and continued to develop throughout his adult life. His theology evolved as he incorporated education and experience into his Christian belief system. In his mid-thirties, Roy made a significant decision to change careers and applied to attend seminary. He began his studies at the Associated Mennonite Biblical Seminaries in Elkhart, Indiana and completed his Master of Divinity at McCormick Theological Seminary in Chicago. Roy’s membership and participation in the congregational life of Calgary Inter­ Mennonite church, Oak Park Mennonite Church, and the First Unitarian Church of Hamilton were life-changing parts of his faith journey.

While at seminary, Roy met the love of his life, Paul Hawkins. They celebrated a “service of continuing commitment” in the fall of 1996 and a 25th-anniversary celebration in 2016. Their 31st anniversary occurred the week before his passing on 13 September. Roy’s life with Paul involved living in separate cities and countries for several years, but it was worth every challenge and difficulty.

Roy began training as a spiritual care provider by studying Clinical Pastoral Education in Fort Wayne, Indiana and then supervisory training within that discipline in Indianapolis. He worked with students in Indiana before moving to Hamilton in 2001 to take a position as a spiritual care provider and educator at St Joseph Healthcare Hamilton. He considers the dozens of students he supervised over the years part of his legacy.

Paul’s father, Paul Sr. and Paul’s brother Bruce predeceased Roy. Roy is survived by Paul’s mother, Janet, his brothers Jeremy and Ronald, their spouses, Paula and Charlene, and their families.

When Roy and Paul lived in the US, their “adopted” Indiana family, the Millers, became an essential and wonderful part of their lives: Lloyd and Mary Jo, their daughter Roz Riecker and her husband John, and their granddaughters Zoe and Ava. Lloyd, Mary Jo and John predeceased Roy.

The medical professionals who worked so hard and with such compassion to do everything they could to provide him with a quality of life these past years were never less than amazing.

Last but never least, Roy could not begin to list all the people who were friends along the way and gave his life joy. He trusts that they know how much he loved them.

Roy and Paul chose the significantly more environmentally friendly method of aquamation for the disposition of his remains through Eirene Cremations. Two Services of Remembrance will be held for Roy; in Hamilton at the First Unitarian Church of Hamilton, 170 Dundurn St S, Hamilton, ON L8P 4K3, on 29 October at 3 PM, with a reception to follow, and in Calgary at Calgary Inter-Mennonite Church, 1308 Edmonton Trail, Calgary, AB T2E 3K7 on 26 November at 10:30 AM, with a reception to follow.